Savary Island was formed by marine clay and sand left behind, deposited by meltwater streams from glaciers that retreated from the Strait of Georgia approximately 10 000 years ago. The result is a truly unique tropical-like paradise with features – such as sand dunes and a sensitive dune-ecology – found nowhere else in British Columbia.

Kayaking to Savary from Lund

From Lund it takes anywhere from 45 to 90 minutes to reach Mace Point – the only area of exposed bedrock on the island – on Savary’s eastern shore.

By hugging the shore of Malaspina Peninsula southwards from Lund, smart kayakers will limit exposure to boat traffic and any potential prevailing winds in the Strait of Georgia. Interesting rock formations can be found here, populated by small colonies of seals that you paddle past.

From Hurtado Point, at the shortest distance between the mainland and sandy Savary, cross to Mace Point on the eastern tip of the island, watching for boat traffic all the while.

Continuing around the south side of the island – originally named Áyhus or ‘double headed serpent’ by the Coast Salish people – you come to South Beach, which is a popular spot for summer vacationers.

South Beach is first and most accessible beach, with towering sand cliffs and driftwood artwork lining the shore, while those looking for more of a remote island getaway have to only venture slightly further around the long southern shore to find their personal oasis.

A shallow reef of massive boulders – left behind by glacial run-off during the last de-glaciation in this area – extends for hundreds of metres off-shore, deterring powerboats and vacationers from approaching too closely. They also create perches for eagles and haul-outs for seals and sea lions, as well as protection and habitat for all kinds of colourful intertidal creatures.

This coupled with protection of the central portion of Savary from any development, means that the area known as Duck Bay is virtually deserted at all times of year, with the occasional exception of residents walking their dogs in the trails behind the beach.

At low tide you can paddle – or even walk – out to this boulder-strewn reef to explore the tidal pools and the fascinating marine life that occupies this unique ecosystem, from sea stars to sand dollars to fierce-looking, slug-like sea cucumbers. Eagles use the massive boulders as perches to scan the ocean for prey, while seals and sea lions occupy each new rock as they are exposed by the falling tide, sunning themselves much like their human contemporaries on South Beach.

On the beach, gulls, herons, oystercatchers, sandpipers and other shorebirds are  abundant. The winds that form the sand-dunes in this area also cause the erosion and deposition of the insecure shoreline, meaning that human impact must be minimized to protect this fragile environment. Duck Bay is a fantastic place to camp in the shadow of Vancouver Island, but care must be taken to ensure the ecology of the island – which supports numerous flora endemic to Savary – is maintained. 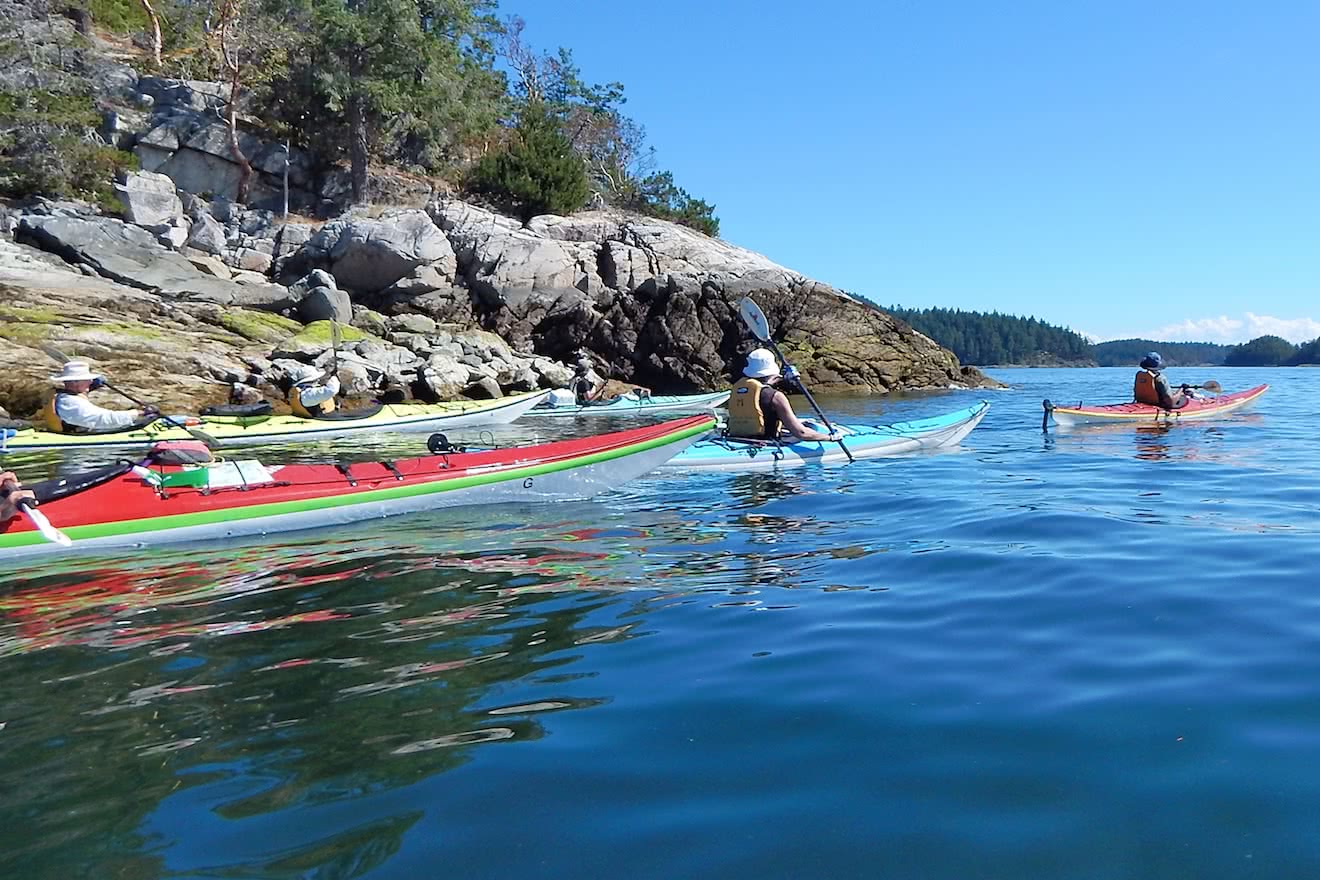 From Duck Bay, it is a simple paddle back to Lund the way you arrived, but ambitious kayakers may fancy a full circumnavigation of Savary to the northern shore. Rounding Indian Point at the western tip of the island offers some of the best views in the area, with the white-capped spine of Vancouver Island to your left and the impenetrable peaks of Desolation Sound and the Coast Mountains on your right.

If choosing to circumnavigate Savary, attention should be given to the rise and fall of the tides. A 14 mile trip hugging the shore with high tides can be extended by a number of miles should the tides be low, with the flat, shallow beaches extended hundreds of metres in places to the ocean when the tide is way out!

It is recommended to return to Lund after hugging the entire northern coast of the island and crossing at the shortest point back to the mainland. While it may be tempting to make the 4.5 mile crossing straight to Lund from Indian Point, distances on the water are often misleading, and weather can change quickly in the exposed Strait of Georgia, trapping inexperienced kayakers far from safety.