Can You Kayak with Whales in Desolation Sound?

A commonly asked question from guests planning on visiting us in Desolation Sound concerns wildlife: “What will we see and when is the best time to see it?! Is it possible to kayak with whales?!”

Whales and dolphins are some of the most asked about wildlife, and for good reason! These charismatic marine mammals have fascinated and excited us all for thousands of years. In Desolation Sound we commonly see several types of whale and dolphin, from orcas and humpbacks down to harbour porpoises.

While Desolation Sound is more known for its warm temperatures and striking mountain scenery than its concentration of whale sightings compared to the Johnstone Strait, the increasing number of sightings in recent years has been fantastic to see for our guests and guides alike!

Following is a brief description of each species and their migration patters through Desolation Sound. 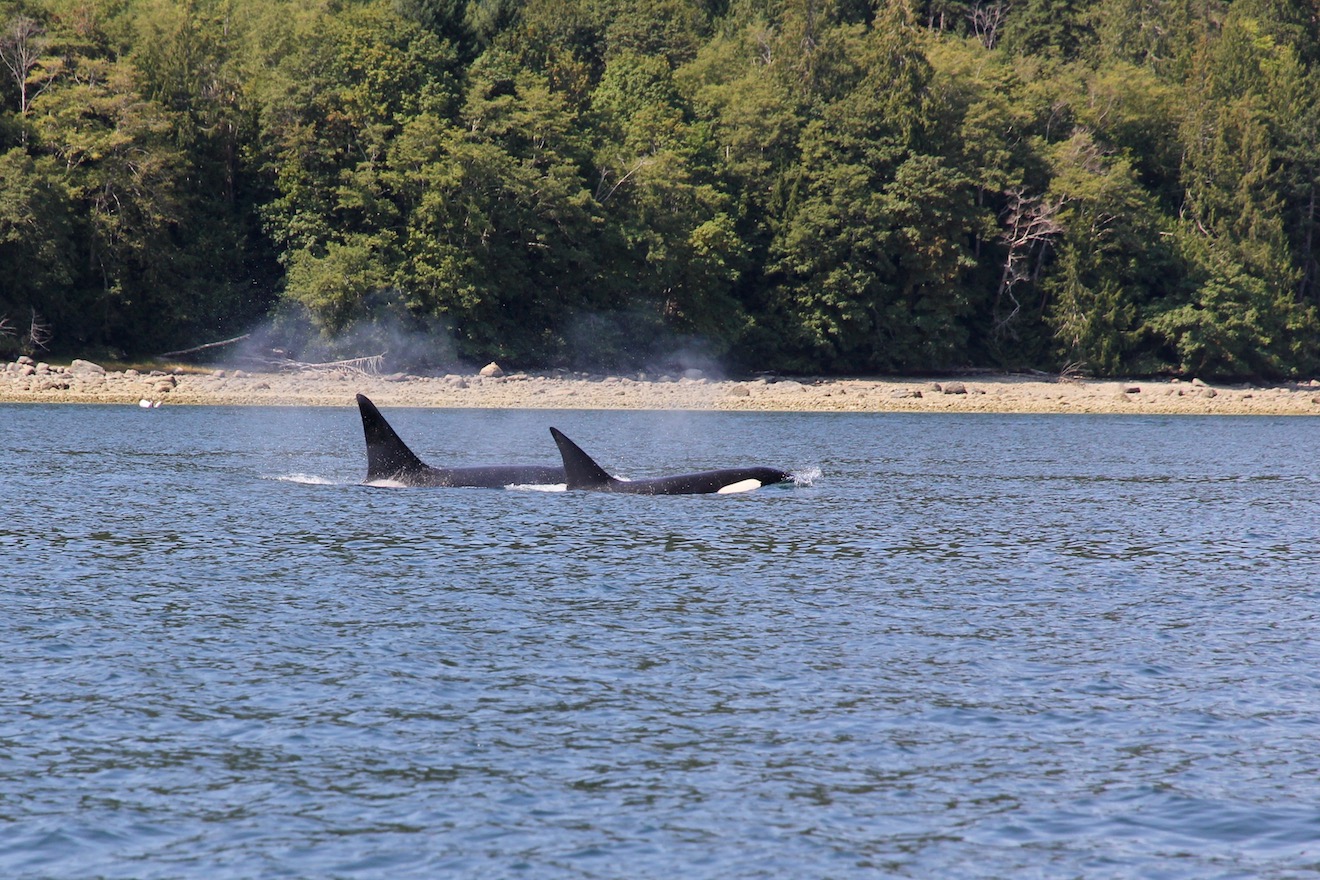 Orcas are fascinating, well-loved, and occasionally feared apex predators that have a well-earned reputation for both astounding intelligence and devastating hunting methods. On the inside of Vancouver Island in British Columbia there are two commonly seen sub species of orca – the resident ‘fish eaters’ and the transient ‘mammal eaters’.

In Desolation Sound, we are far more likely to encounter the transient variety, named for their seemingly range-less movement up and down the coast in search of their preferred prey: the harbour seal. They will also prey on sea lions, dolphins and porpoises; but don’t worry, despite heir ‘mammal eating’ reputation, there has never been a recorded attack on a human by a transient orca in the wild.

Transients travel in groups of 4-6 individuals, while residents are usually seen in much larger family pods. They are slightly larger than residents and tend to have a dorsal fin with a more pointed tip.

We have the potential to see and kayak with orcas in Desolation Sound at any time of year as they roam through the area in search of prey, though it is definitely not a guarantee. We will often have multiple sightings of a group over a 4 or 5 day period, and then a period of no sightings for a while before the pod – or another pod entirely – returns briefly again. 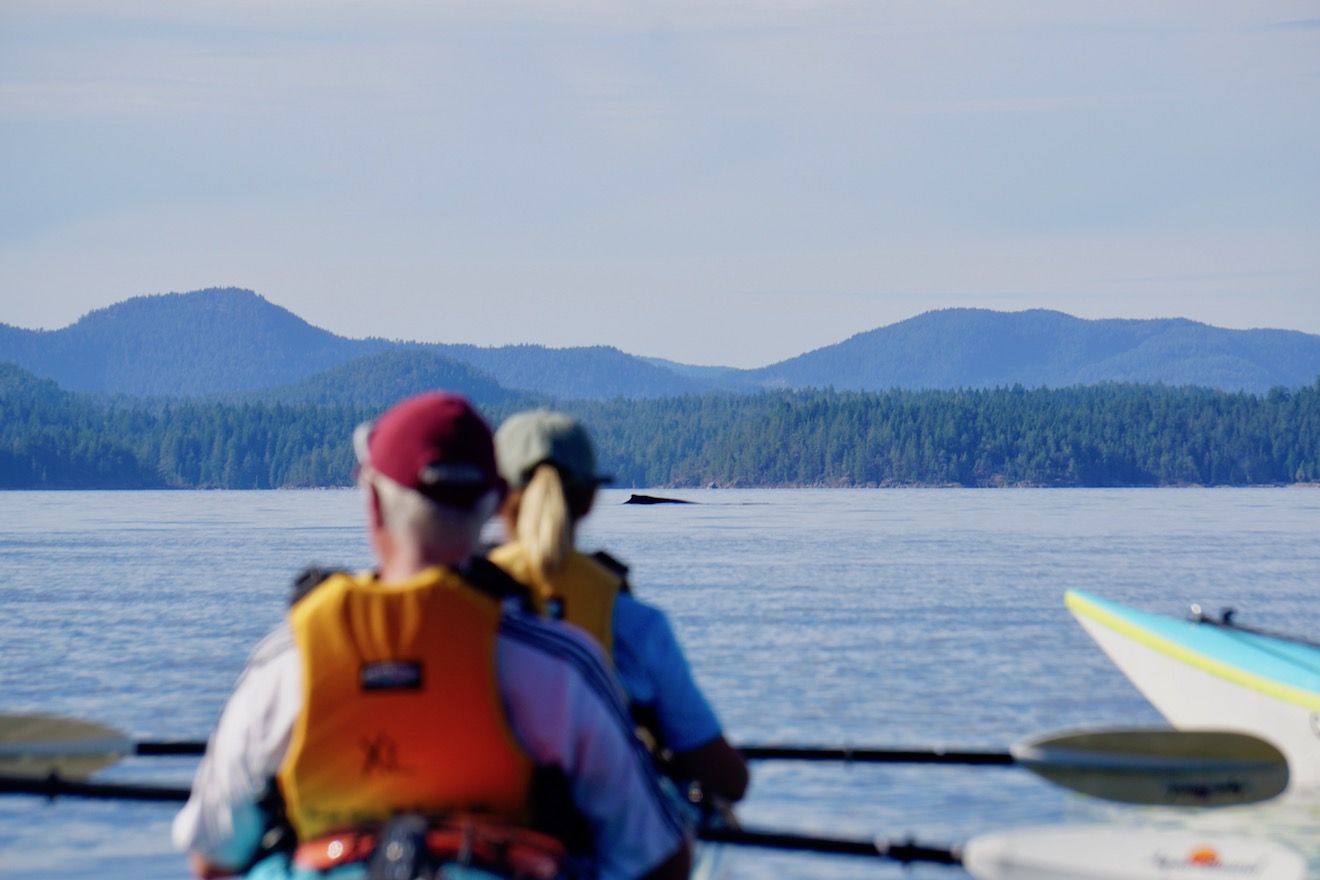 After being fished out of the waters inside Vancouver Island early last century, humpbacks have made a stunning return to Desolation Sound and the Strait of Georgia in recent years. Many of our guests have had the opportunity to kayak with whales such as humpbacks in Desolation!

The typical migratory pattern of humpbacks is to head south for the winter to warmer climates to breed, and then return in the summer to feed in our nutrient rich waters. Anecdotally, we start to see more humpbacks in June in this area, and the numbers increase steadily and peak in late August and September, before the huge mammals begin their migration south en masse.

That said, a small population does tend to remain year round in the Strait of Georgia. The are also noted to be arriving earlier in numbers and leaving later, most likely due to the abundance of food!

Adult humpbacks range in length from 12-16m and weigh 25-30 tons! They have a black body with a stubby dorsal fin, and are usually seen solo or in small groups of 2 or 3. They will usually surface 5-10 times before raising their flukes and diving for up to 20 minutes.

However, lucky guests have spotted these huge mammals breaching and throwing their entire body out of the water at one time. Despite this, biologists are still not quite sure why whales exhibit this exciting behaviour!

Pacific White Sided Dolphins are usually spotted in pods of up to 50 members, but sometimes they are seen in larger pods of several hundred dolphins or more!

They can be easily identified by white and grey markings underneath and at the tip of their dorsal fin. They are much larger than porpoises, and they often exhibit flamboyant behaviour such as constant breaching and surfing in the wake of ferries and power boats.

Dolphins spend most of their time on the inside of Vancouver Island in the passageways north of Desolation Sound – the Discover Islands, mainland fjords, and into Johnstone Strait. However a couple of times a year there are sightings of large dolphin pods in the Sound and even in Okeover and Malaspina Inlet. Our 5 and 7 day Expedition Tours have a greater chance of sighting dolphins as they head further into these passageways and mountains fjords.

Porpoises can be seen year round and tend to be seen in small pods of 2-5 ‘porpoising’ along at the surface. They rarely – if ever – breach or play, and are far less gregarious than their larger dolphin cousins.

For more information on kayaking with whales, dolphins, porpoises and all other wildlife in Desolation Sound, please check out our Wildlife Page on this website!