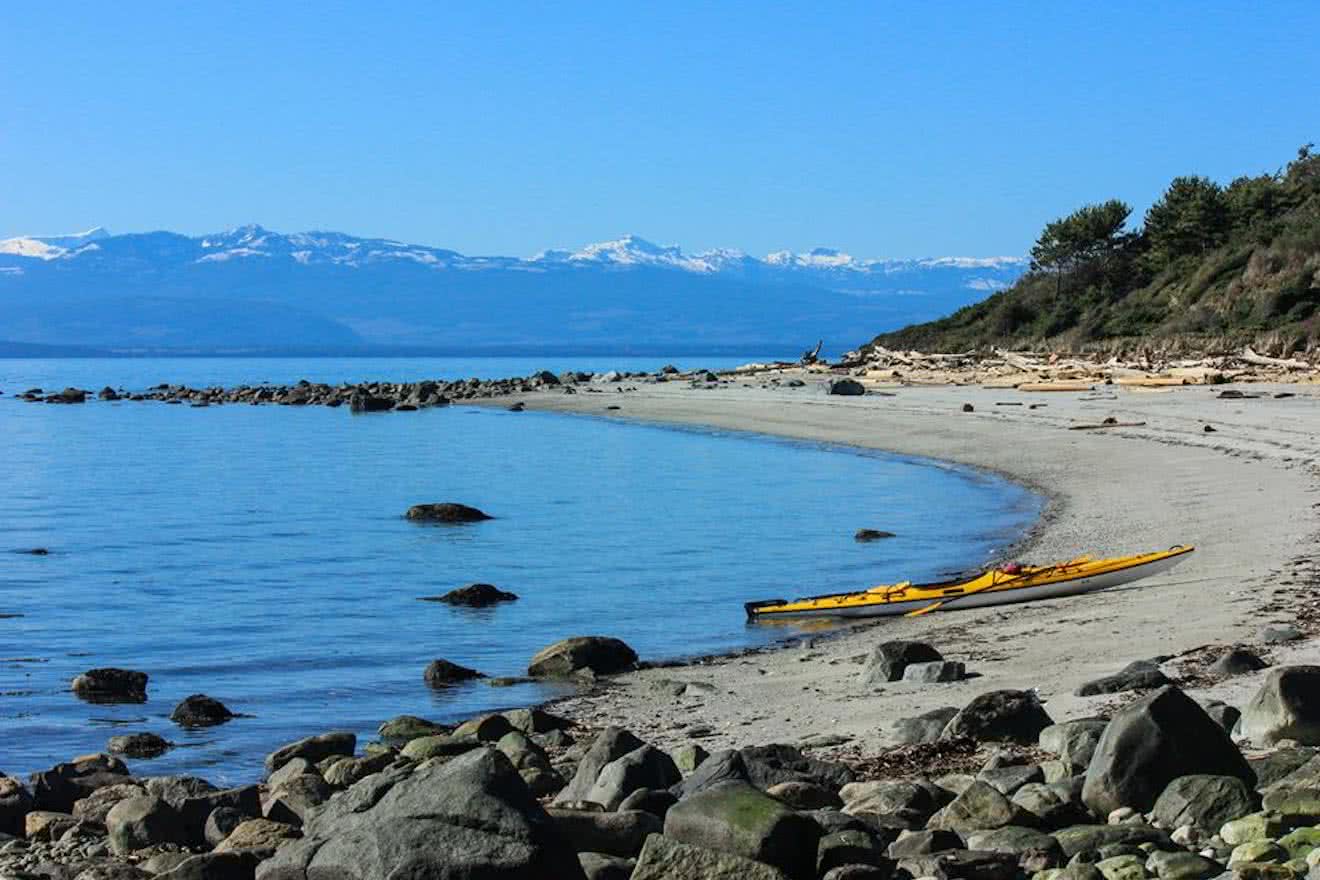 Long, hot summer days call for a warm sandy beach and a nice cool breeze coming in off the ocean. Despite the preponderance of rocky coasts and granite slabs on the wild west coast, there are many places in Powell River – often remarkably free of people – where warm yellow sand meets gently lapping waves, perfect for families, couples or the solo traveler looking to unwind.

It might be said with some accuracy that Willingdon Beach is the central hub of summer life in Powell River, with all the unique aspects of this beautiful part of the world radiating from this popular summer beach like spokes on a wheel.

Located on the edge of the Westview neighbourhood, Willingdon Beach is where the ocean and the forest meets the cultural and artistic centre of Powell River. To the south lies Marine  Avenue, the commercial centre of town with cafes, restaurants, nightspots, art galleries, book stores, health food stores and more. To the east and north lies the rainforest and a seemingly endless network of trails to explore. While to the west in the long afternoons the sun sets slowly over the rugged spine of Vancouver Island and the Strait of Georgia.

The beach itself is popular with families due to its protection from northerly winds and the expansive grassed area behind it that is perfect for picnics and extended afternoons, while the Wililngdon Beach Trail follows the coast to the north along an old 1910 rail bed once used to carry logs to the wharf at the Powell River Company Mill. At many points along the 1.2 km stretch there are educational and interpretive signs that teach the visitor about the area’s history, the unique flora and flora found on the west coast, and the usage and usefulness of long retired logging equipment, which is displayed beneath old growth firs, cedars, spruce and maples.

Festivals converge on Willingdon Beach in the summer months, and many guests find themselves swept up in such celebrations as diverse as the Pacific Region International Summer Music Academy (PRISMA), the International Choral Kathaumixw, Sea Fair, Powell River Blackberry Festival, and Powell River Logger Sports, which all take place on the beach with the stunning backdrop of the Salish Sea.

For those craving seclusion, Donkersley Beach is located about 15 minutes south of Powell River, and offers long sandy shorelines with stunning scenery and incredible views south down the Strait of Georgia between Nelson and Texada Islands – a unique perspective among Powell River coastlines

At low tide the flat sandy beach at Donkersley extends way out. Huge games of frisbee take place along the shore, skimboarders throw down tricks along the smooth wet sand, and kids sit and build massive sandcastles that could stand the test of time – or at least until the tide begins its return crawl up the beach. The sandy nature of the beach allows families to stretch out and explore to their heart’s content, with less worries about barnacle encrusted rocks and steep cliffs plummeting into the ocean.

As the tide rises, too, the warm sand heats the incoming water to bath-like temperatures, transporting you far away with just a little imagination to much warmer climates.

No discussion of beaches in this region would be complete without mentioning stunning Savary Island. And when we say beach here, we mean the whole island!

7.5 km long and 1 km wide at parts, Savary was named ‘Ayhus’ by the Coast Salish people, the ‘double headed serpent’, and from above it certainly looks like it, twisting and turning just off shore from the town of Lund, 30 minutes drive north of Powell River. A water taxi runs every hour and makes the 15 minute crossing from Lund to the government dock on the northern shore, and from here you can rent bikes or walk the sandy, almost car-free streets in exploration.

South Beach is the most popular beach destination on Savary, easily accessed by crossing the shortest length of the island after hopping off the water taxi. Huge fields of driftwood line the high tide line of the beach, which are creatively put to use to build makeshift shelters with which to avoid the summer heat, while skim boarders, kayakers and stand-up paddle boarders drift up and down the coast in the ebbing and flowing tide.

On the western edge of Savary, Indian Point is another popular beach with long expanses of sand stretching out further and further from the shore at low tide towards the distant, snow-capped peaks of Vancouver Island on the horizon.

If you’re looking for a bit of isolation on your beach-side vacation however, Duck Bay in the middle of the southern shore of Savary is almost continuously vacant no matter which time of year. This large bay is protected from the ocean by a reef of erratic boulders – remnants of the island’s formation as a glacial moraine – which keep the power boats out and the atmosphere serene.

At low tide you can even walk right out to many of the these boulders and search amongst them for all kinds of marine and bird life, from sea stars and cucumbers to beached seals and bald eagles.

Away from the beaches you can find funky cabins nestled in the forest and some unique dune-based ecosystems not seen anywhere else on the BC coast, including some monster arbutus trees. Savary is truly a special place, whether you’re lying on the beach or escaping the sun, and a must-visit destination for those with an extra day or two up their sleeve.

Harvesting Shellfish on Your Desolation Sound Adventure
Scroll to top